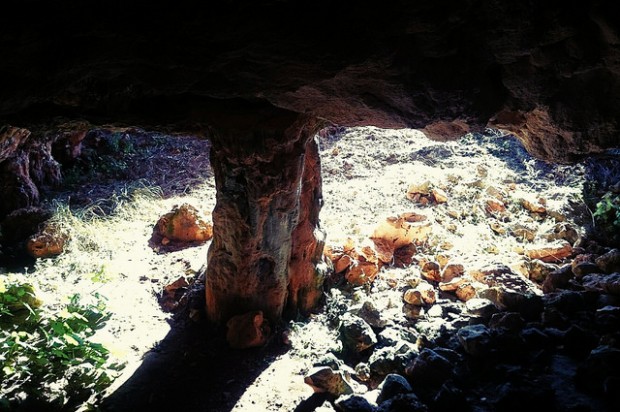 Calafarina Cavern is on the road between Marzamemi and PortoPalo di Capopassero. It is 100mt long and 20mt deep. Artifacts found here are proof that this place has been inhabited by human life since Neolithic times, followed by the Greeks, Romans, Byzantine, Arabs and Normans.

This ancient Cave was the origin of many a legend. The most famous, locally well known one, is about treasure. This is an example of what often happened on this island. Legend and History come together and sound the same. There are many more legends but 3 are the most commonly known and talked about.

The first talks about Noto’s Emir called Ben Avert. His wife, after his death, prepared to leave the Island from Marzamemi to Egypt, but before leaving, hid the treasure in this cavern to keep it safe and to prevent it being stolen by pirates. After this she killed the slaves to ensure her secret was safe. Legend has it, from that day, the souls of those slaves, are there to protect the cavern. It is said that at night in the month of February,  they call the name of the man who can break the spell.

The second one talks about the Maniace daughter named Zoraide who lived in the castle. At that time it was located above the cavern. After the death of her father she was in love with Sidnar. They too were killed but before Zoraide remembered the magic spell her father had taught her. The spell was a ring that Zoraide threw into the sea and  was eaten by a fish. The man who finds this immortal fish will be the man who has access to the treasure.

The last one talks about the king named Varvalonga who left his Ambassador in Sicily called Cala Farina. He was very ruthless and became very rich by exploiting the local population. He told his daughter: should the king call me and I have not returned, then I was killed by him, so you must kill yourself and with this the treasure will be with us for eternity. However, the spell will be broken if someone is able to speak the same words that she used before killing herself.

Whether the legends of a treasure exist or not in the cavern a lot of evidence can be seen at the Paolo Orsi Siracusa Museum. Many archeological experts were here in the last century who gave a lot of historical importance to this cavern.