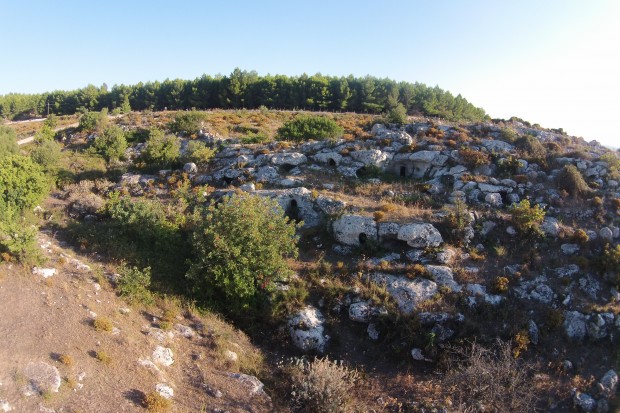 By EloroDistrict Sicily Staff · On 3 November 2015

The prehistoric village of Castelluccio in the territory of Noto is one of the most important archaeological sites in Sicily, 2200 BC , the tombs were closed with stone gates: an example of it can be seen at the PAOLO ORSI MUSEUM in SYRACUSE.
The excavations were conducted over a century ago by Paolo Orsi, he began to light numerous closed tombs and the ruins of the village, a further series of excavations conducted 80 years ago also revealed the presence of a sanctuary at the top of the hill.
This place was also inhabited throughout the Sicilian Time,  here it’s possible to find an Heroon – a religious place used for the Greek Cult Heroes – but also tombs and ruins of Byzantine times and the Medieval Age.
The Necropolis is the biggest part of the site and consists of a hundred tombs inside the rocks, the most important, of which, is called “Tomb of the Prince” which is fronted by 2 pillars. It is the monumental pre historic bronze.

Monumental prehistoric tomb from Castelluccio
by diegobarucco
on Sketchfab