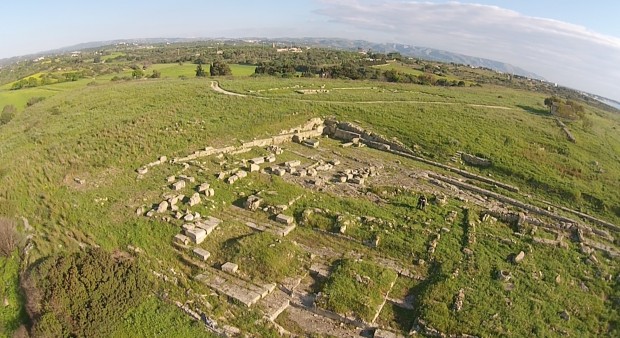 This archaeological area is the largest archeological area of the District from which it takes its name. Eloro was a Greek colony South of the important city of Syracuse. Eloro was an important trading center founded by a Greek colony from Corinto at VIII century b.c. The main road called “Elorina” was the link for the Greek towns of Syracuse, Gela, Kamarina, it crossed Eloro.

Eloro was the town where more or less all the District’s town came: Rosolini, Noto, Avola, Pachino, Portopalo

This town was under Greek rule, followed by Roman rule and was flourishing, subsequently ruled by the Byzantine ‘s. It lost a lot of importance after Arabian rule because they decided to invest more in the “new” town of Noto, in Monte Alveria, the town was completely destroyed by the earthquake of 1693.

Here it is possible to see part of the AGORA’ and some Temple Bases, one of which was to Asclepio Asklepios dedicated to sick people who stood asleep awaiting the visit of God in a dream that would lead to healing. It stood near a small thesaurus, a small temple, intended to house the votive offerings and dated to the second half of the fourth century. Close to the temple, you will find many cisterns used for the storage of water.

To the South, on the slopes of the hill, there is a Greek theatre, partly dug into the rock and partly built, dating back to the late fourth/early third century BC. Northwest was the Pizzuta column, a funerary monument at that time.