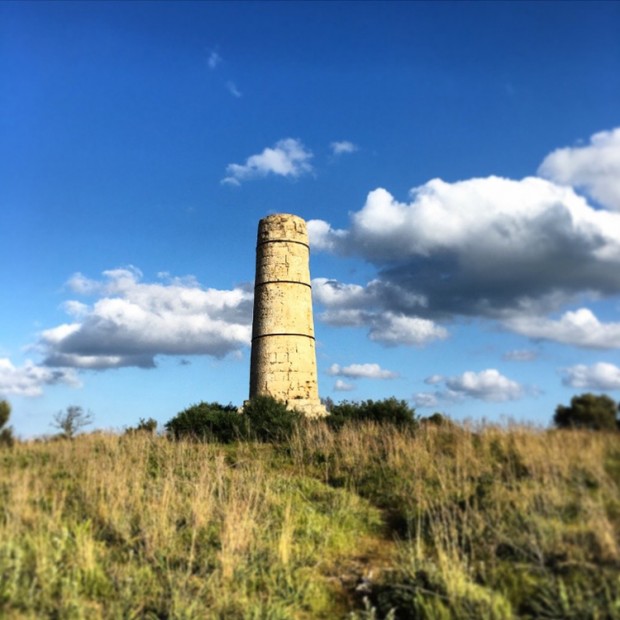 Pizzuta column made up of square blocks on a base of 4 steps. The base diameter is 3.79 and a height of approx 10.50 m. This column is located in a prominent place by the sea, from the Greek town of Eloro and the lands of the Tellaro river. Its location is designed to be in line with the 4 cardinal points, the respective corners of the base, this describes them perfectly. The Pizzuta column is a testimony to the contribution of the restoration made by Ferdinando of Bourbon during the Two Sicilies Kingdom. There are several theories about its origin: One is that the monument may have been erected after the defeat of Hippocrates of Gela against Syracuse in the fifth century BC. The second theorised  that the column had been erected in memory of one of the bloodiest battles in Sicily, the most important battle in this area: the famous battle between Athens and Syracuse, which saw the latter react to one of the numerous military expeditions in the history of antiquity. Near the river Asinaro the Athenians suffered a crushing defeat at the hands of the Syracusans who had long maintained their independence from the Greek homeland. The third hypothesis came from one of the works of archeological Paolo Orsi. The mission was to explore the surrounding area to have a better understanding into the nature of the column. He realised that it was not a monument in celebration of a victory, but a tomb. He found it under the column, discovered in the rock, an underground funerary quadrangular, red and white stuccoed, with two warriors, one of which was holding a bronze era of Hieron II. This would shift the original dating from the fifth to the third century BC, but it is possible that the bodies had been buried after the oldest dating.