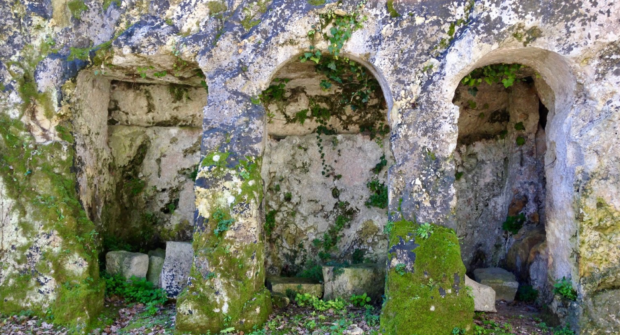 This small village is located in the territory of Noto in the district of Saint Lucia of Mendola on the provincial road 24, continuing from Noto to Palazzolo Acreide. This place is incredible, behind the small village church it’s the most interesting part of this site. An underground which apparently had already pre-Christian origins with the cult of Saint Lucia Roman widow. Mendola comes from the town formerly called Mende.
Description: The church is located at a place, rich in water, very popular in the early Christian period attest how the various works of sewage systems and underground tanks and some of these are located under the grotto of Saint Lucia, reused as a burial ground. The church carved into a rocky ridge and is at the center of other environments also carved into the rock. The center of the church has a basilica plan, probably once covered in wood, as evidenced by the housing bore beams. West opens a presbytery and a semicircular apse so as if it were an altar. To the left, there is a small central nave divided by three arches from the reservoir and on the bottom of it, you can notice a system of a channel that has water flowing from a spring located in the immediate vicinity. So it is possible that this place was a baptistery. To the right of the apse opens a space of irregular shape with large niches destined to contain sacred vessels and then two rooms connected with traces of paint on the walls. Historical information: The cave is mentioned for the first time in 1103 in which Tancredi, Count of Syracuse, grants to the monastery of Santa Maria di Bagnara, the church of Saint Lucia “de Montanes”, finds himself in a degree Ruggero confirming the donation and, again, in a papal bull of Celestine III of 1192, up to the ecclesiastical tithes for the years 1308-1310. So this is a sacred site recognized in time.
Currently, the state of the frescoes is bad and you can glimpse only a few excerpts of pictorial material and some letters. From the limited data available, you can see figures of saints.
Among these tombs, it seems to have refugees Lucia and Geminianus sought by Emperor Diocletian. Over time then the site has experienced several awards by the rulers that have occurred in Sicily. Since the last underground basilica, every colonization has left here a sign of its presence.

The Saint Lucia of Mendola cave, as an employee of the abbey of Bagnara, appears crucial to the re-Christianization and Highland Latinization over Syracuse. It might actually be considered the only an appendage of the biggest Norman churches of 1103.
Share Tweet